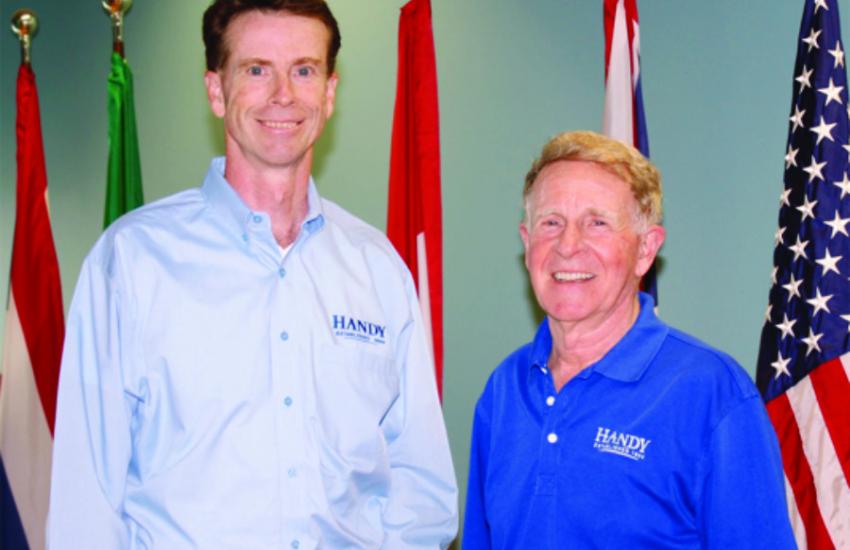 He succeeds his father, Terry Conway, Handy International CEO, in the day-to-day operations of the company, which has been in the family since Terry purchased it from the Handy family in 1981. “We are very excited to announce this promotion for Todd as he assumes this important role at Handy and continues the growth of the family business,” said Terry Conway.

Todd Conway, most recently the company’s Executive Vice President, has worked in a number of areas at both the Handy plant and the corporate office dating back to summer breaks from his undergraduate studies at the University of Notre Dame. In 2007 he joined the company as its Chief Financial Officer (CFO). He was promoted to Executive Vice President in December, 2013, and his role quickly expanded to include not only finance but operations, procurement and quality control.

Prior to joining Handy, Todd Conway worked in the financial division of a number of large multi-national companies. He is a CPA who holds an MBA from Duke University.

Originating as a fish business in Rehobeth, Maryland in 1894, the company was founded by John Handy, and run by his family up until the time it was purchased by Terry Conway. In 1903, the company relocated to Crisfield, Maryland and diversified into oysters, soft crabs and tomatoes.

Under the elder Conway’s leadership, Handy moved from just a Mid-Atlantic retailer to a company moving product across the United States and to the west coast. In 1985, Handy broke into the Japanese market, and a year later began selling soft crabs in Europe.

“Dad always had a desire to own his own company, and fulfilled that dream with the purchase of Handy International 34 years ago,” added Todd Conway. “However, he’ll be the first to tell you, and passionately, that Handy’s success story is not his but truly an Eastern Shore success story. The credit belongs to our friends and neighbors here who have always taken great pride in creating and refining new processing techniques and products, and then traveling globally to introduce them to the world, which they still do today.”

When Chesapeake Bay crabs fell into a steep decline a few years back, Handy set up operations in the crab abundant area of Southeast Asia and also in Mexico. Its Maryland team traveled abroad, instituted the same company standards, and established a quality assurance division in each country.

Today there are 14 Handy operations in six nations processing soft crabs, pasteurized crab meat, fish, oysters, seafood cakes, shrimp products, appetizers and crab entrees, including crab cakes. The company focuses on quality, great flavor and the use of the finest ingredients in every new product it introduces.

“Handy International continues to be the innovator in the crab industry, and is recognized around the world for its quality standards, which have remained constant for its entire 120 years,” said Terry Conway. “We couldn’t be happier that the family tradition of exceptional customer service and safety that Todd helped to enhance, and is so important to everything we do, will continue under his leadership of our great company.”

Anyone interested in learning more about the exciting innovations happening at Handy International may visit their website at www.handyknowscrab.com or call them at 410-912-2000 or 800-426-3977 ###